Akuzan Kakeru is an assassin-for-hire in the Edo RP timeline, known for his violent streak and is apparently very accomplished in what he does. There are rumors about a bounty stuck on his head, but so far no one has stepped up to claim it. He has a history with Yuujou Shuuen and Karasumori Hyouji, being formerly involved with the two as freelancing mercenaries. He now works alone, which is just the way he likes it.

Kakeru has pale skin, green hair with blue-green tufts in it and an ahoge sticking up stubbornly at the back of his head and crimson eyes. He has a fairly muscular build, usually just sporting a chainmail shirt, arm guards and a pair of white hakama as if taunting bounty hunters that they can't get him even with how much of him he was showing. When the days get colder, he dons a green gi top with a brown obi, occasionally wearing a weatherbeaten faded green cloak and a woven straw hat with it. He also wears white tabi with his woven sandals.

Kakeru is playful, energetic and a bit cryptic at times, and his respect is reserved for those he knows well and those he deems as strong. He's generally amiable to people, so long as they watch what they say to him. Kakeru finds it difficult to express complex emotions such as jealousy and love, usually assosciating these emotions with something closer to what he knows (e.g. referring to jealousy as simply being angry, and referring to love as simply liking something). His moods swing quite a lot if the topic of conversation hits closer to home, but if it's just work, or threats on his life, he won't bat an eyelash.

The Akuzan clan is a long line of assassins, who are trained to kill from a young age. They are largely for hire, extremely dangerous and can even be considered insane at times. They live together in a small village, which used to have villagers, but it didn't take very long for the whole village into a village ruled by the Akuzan clan.

Kakeru is the second heir to the Akuzan name, the first being a cousin of his, a son of the current head of the clan, who happened to be his mother's older brother. Despite being dangerous to people in general, they are a tightly-knitted family who won't be foolish enough to let another family member harm them.

Their creed was simple; "The world is a playground for the strong"

With this teaching in place, young members of the clan are taught to view the world as a cold, cruel place. You live only for yourself, and being alive is a proof of strength.

Working as a mercenary or an assassin is in fact, their training. Through these jobs, they get a taste of the real world, a chance to exercise what they've learned, and to show people that they were leading a 'deluded' life filled with weakness, emotion and useless attachments.

Kakeru has yet to realize that he was slowly falling victim to the laws of this outside world though... He only noticed it when he started showing pity to a beggar he met on his travels. On any given day, he would have murdered the man for being weak, but instead, he gave the man his money pouch, thinking that he could just steal more if he wanted to.

He tried to wash the strange taste out of his mouth by taking a job that intrigued him; he was required to hunt down the renegade mercenary Yuujou Shuuen, and bring his head back as proof of the job being done. And so the hunt began...

"Ever thought... that maybe I loved you?"

"I like smart girls... They actually use that thing in their heads, and it's a lot more fun to play with them." 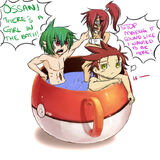 Pokicup meme with Shuuen and Hiromu 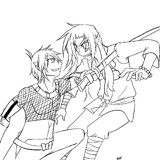 Confrontation with Hyouji
Community content is available under CC-BY-SA unless otherwise noted.
Advertisement