"In case you aren’t eating there, want to have lunch with me? I promise my cooking’s decent ouo"

"Just because Finny had baggage doesn't mean I'd like him less."

"… and Finny, if you wiggle your way out of this arrangement, I’ll one day sneak up on you while you’re napping at night dressed like a dead Vulpix and scare off your pants."

On the trip their extended family took to the Ballast summer villa, Ruri was one of the spectators to the storytellers in the group, eating fruit slices with LeRoux.

Dunking Foxes - LeRoux taking Ruri for a swim. Against her will. 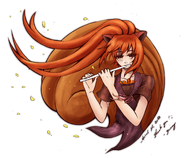 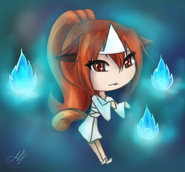