LeRoux Wilgestein is a Finneon gijinka, who studies various branches of acting (theatre, broadway, etc) in hopes of being a successful actor later in life. He expresses an interest in dance as well, possibly hoping to pursue success in both dance and acting.

LeRoux has a regular build for someone his age, has dark blue hair that frames his face and looks rather unkempt with two tufts sticking up on the top of his head. He has dark pink eyes with a black marking on each eye which goes down diagonally and stops at his jawline just under his earlobes. His clothing are largely blue in color, donning a light blue jacket that is somewhat reminiscent of a navy admiral's coat with pink straps and butterfly-esque adornments on his shoulders, which he matches with a pair of similarly colored trousers. He wears a dark blue turtle-necked, long-sleeved shirt under his jacket (which he only drapes over his shoulders as opposed to putting his arms through the sleeves) and finishes his outfit with a pair of black dress shoes.

LeRoux is something of a troublemaker and a sloth stuck together in a blender. He hates putting effort into anything, preferring that others put in more effort so he gets the easy way out, yet dares to dream big. It might just be that he hates putting in effort for things that don't necessarily benefit him, but it is unclear if this is the case. LeRoux acts in a way that he makes it look like he wants people to hate him, which could be an easy way to filter if he would like someone's company or otherwise. Once his trust is gained, LeRoux is often seen as playful, other times unpredictable. It is interesting to note that the Finneon has a softer side to him, which only certain people have the pleasure of knowing about.

LeRoux came from a broken family. From his parents to his siblings (of which he had about 6, him being the youngest), they looked like they were trying to find faults in each other on purpose. Little LeRoux didn't want any of that. Whenever they started yelling, he'd steal away to a friend's house, have fun, and pray that by the time he got home, they'd stop going at each other's throats.

Normally, this wasn't the case. He attempted to patch them together again, but being younger than everyone with almost no say in anything, that didn't work well at all. So they argued and clamored, and one day, LeRoux ran away to see if they'd come after him.

He didn't know what went through their minds when they discovered he was gone, but they didn't come after him.

He'd be sad to know that they didn't care if he loved them or otherwise, but escaping just gave him all the peace he could want. The first thing he did was head over to a relative's house, pull puppy-dog eyes and get them to keep him till he's old enough to work or something. A bit of luck struck him in the form of a school for fine arts. The boy had always liked acting, and a friend got him to like dance as a form of art. So he applied to the school, where he planned to excel and graduate such that he could make a living out of a career in dance and acting.

LeRoux started school quite normally, attempting to make friends and the likes and pranking them where he sees fit. He personally didn't think anyone there was worth actually getting to know with how shallow and boring most of them were. Everyone was the same, to him. Girls were either all about boys and make-up and looking pretty, or they were being rebels. Guys were either all about girls and seeing who's cooler, or they were being plain douches.

If not for the fact that LeRoux wanted to graduate from here, he would have bolted out of the school and looked for a more interesting place to be. Honestly, the only interesting place he knows of in the campus grounds was the beach. That was exactly where he met Ruri deLune after almost drowning a schoolmate (who ever heard of a water-type being unable to swim..??) for shits and giggles, later on scaring the daylights out of Ruri when he took her into the water next.

Sure, that got the both of them to nearly drown, and admittedly LeRoux thought it was kind of stupid for him to let a girl wrap her arms around his neck, and said girl was a fire-type. Meaning she wouldn't like water, and that she'd inevitably cut off his air supply out of pure reflex. The whole event had them glaring at each other, but they made up after a while.

At that point, LeRoux had given up trying to befriend her, finding it absolutely unnecessary for her to get angry at him. She DID have the option to just trust him with the swimming, but that was just him not wanting to accept that he was also in the wrong. Much to his surprise, Ruri didn't leave him alone, and slowly, LeRoux decided to open up to her. Just one more time shouldn't hurt...

They spent time together, eating together at the cafeteria before later on dancing together in the dance studio where LeRoux had been practicing, absolutely unaware that one of his step-brothers had enrolled in the same school as well. Coincidentally, it was the brother he hated most; Keith Sables. He didn't want to scare Ruri off by saying Keith was a monster right off the bat, and the looks Keith shot at him gave him more of a reason to not say anything just yet.

He did wind up telling Ruri what he thought about Keith though... Ruri insisted that Keith wasn't that bad, to which he replied that he knew more than Ruri did because they were brothers. As these events unfolded, PSOTA was facing difficulty in its administration, which lead to their having to close down. Ruri and LeRoux had to choose another university to attend, later on deciding to enroll in the university Ruri's younger brother Aldrian was attending.

Within a few weeks, the two had moved their things out of PSOTA, bade farewell to the school, and both headed to Ruri's house, where LeRoux stayed temporarily until his application to the new university dorm gets approved.

"Not surprised that you wound up where you are, with an attitude like that."

On the trip their extended family took to the Ballast summer villa, LeRoux was one of the spectators to the storytellers in the group, eating fruit slices with Ruri. 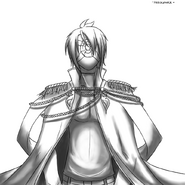