Toriyama Fuuko (toh-ree-YA-mah foo-KOH) is a 26 year-old Chandelure working as a geisha in the Hollows.

Ruri has pale skin accented by bright, red hair usually tied in a high ponytail, curling at the bottom and at the tips of her fringe. Her deep brown eyes are narrow and tiltted up at the corners, while her ears are a shade of brown darker against her hair. Her tails are an almost orange shade of tan.

Fuuko’s something of a quiet personality, wearing her perfectly painted little smile and speaking politely by default. She retains this politeness even if she encounters her dislikes, and won’t actually show her displeasure outright; she’d just walk away from anyone who rubs her the wrong way (and you’d probably never see her again), as long as it wasn’t her job to entertain them. Even if she has her preferences, Fuuko still knows how to be professional about being an entertainer with class.

She makes it a point to keep her composure to the point where she may appear cold or distant in moments of high pressure or emotional stress, and will make it quite obvious she enjoys someone’s company when she goes out of her way to have more of it. She may also smile often, but when it comes right down to it Fuuko isn’t above being manipulative, flirting subtly with ease and being a good enough conversationalist to often swing things her way—or just be sneaky when words aren’t enough.

Managing to get her angry means a high chance of watching the Chandelure smile her little smile while you burn in blue fire.

Her Jellicent mother was a geisha before her, and her Chandelure father was a wealthy merchant who took her mother as his mistress. Fuuko was born well provided for, and trained to be a geisha from a very young age. She took to dancing like she did walking, and learned very quickly how to wear the right expressions suitable for entertaining men and having them like her from her mother.

When her father’s business took a dip, he was no longer able to support her nor her mother, but chose not to abandon them so easily. Fuuko simply had to learn to make do without her usual luxuries—some of their kimono and most jewelry were sold so they could move out of the spacious apartment they shared and rent a much smaller one, and neither were able to be as choosy as they once were when in came to where they entertained.

They still managed to get by, having been skilled entertainers whose company teahouses were happy to have to begin with.

As Fuuko grew older, getting more and more used to less than classy patrons, she began to crave more excitement than what the walls of the City could provide. Her mother tried to dissuade her, but the dissatisfied Chandelure figured life was as good as it was going to get where she was—and quietly moved to the Hollows, taking advantage of the truce and moving things along with a well-chosen word here and there to make her change of residence fairly easy. Despite the stories she knew about the place, she found little difference in what men wanted when she entertained. The places where she did were just a little shabbier.

Fuuko rented a small room to herself leased by a teahouse owner, saving on the rent with the condition that she entertain there every other night. After settling she was free to wander her new home as an entertainer with the full knowledge and capabilities of a geisha, and found the excitement she was looking for in more places than one.

Write the second section of your page here.

Write the second section of your page here. 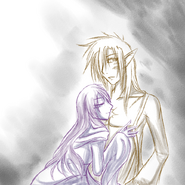