Violette (VYE-oh-let) is an animated, heterochromatic ragdoll currently working at the Eclipse Guild with Veena Ileah and Malech Ebon. She also shares her room with Ludo and, sometimes, Anali.

Violette dresses in various shades of purple, her clothes being made of purple scraps she would collect. Despite her ragdoll nature, her clothes, patchwork skirt and all, are well sewn, save only for her hat with its large, irregular stitching. Her short hair is usually windswept and hardly combed, but soft to the touch. She wears a lacy collar with a silver bell that she never really takes off, and purple boots that go up to below her knees.

Her body under her clothes (in her human form) is stitched in different shades of ‘flesh’—there wasn't enough of the same material to make her entire body, so scraps were used, just like her clothes. Her hat is sewed to her head—unfortunately, despite her best efforts, the creator who'd made her hair made several mistakes, and made her hat permanently sewn onto her head to cover up the damage. Violette is very conscious of the fact that this was a mistake, not her hair, and has since reinforced the stitching. Her hat also has a really wide brim. It measures a foot long on each side, and half a foot in the front and back. It's usually tilted and floppy-looking at the sides.

When she's not being conscious, Violette tends to display cat mannerisms. She purrs softly when she's content, hisses when she's angry or feeling threatened, and mews when she's embarrassed.

Violette is a bit clumsy, and generally cheerful. Because she has a habit of working late, she tends to cut herself with her own claws when she gives in to her other habit of scratching her cheek. She's very good at sewing up her own wounds though, and has since learned to do so with minimal scarring. It's for this purpose that she has a ready sewing kit and a mirror in one of her many pockets.

She usually looks serious and reserved, but is actually quite a goofball with good intentions. She'd do things that look silly with a smile without being embarrassed, unless someone points it out to her. While she's able to talk about herself pretty openly, she's especially guarded about her own personal thoughts and feelings towards other people. Violette, is, however, Incredibly dense and naive when it comes to romance. The only love she came to know about was the familial kind her owner shared with her, and hasn't had any orientation with the opposite sex. She therefore approaches anyone and everyone with the same nurturing kind of affection she was showered with by her owner.

Violette was once a witch rag doll that was a joint labor of love between a seamstress mother and her sickly daughter, using scraps of different shades of violet cloth, the daughter's favorite color. Because her health prohibited her from going out of bed, the daughter would sew clothes for this doll and show them to her mother, who never allowed her daughter to actually help out of fear of her condition getting worse, even though she was struggling to make ends meet. Isolated and without any friends, the daughter would simply sew for her doll and make up stories about her little doll being a good witch to pass the time, talking to her and telling silly jokes like the doll was her best friend.

The day her mother didn't come into her room, the daughter walked into her mother's workroom and found her collapsed on her table. She died that night. The daughter and her doll were taken to a workhouse after no one else knew what to do with her. Due to the workhouse's predictably worse conditions, the daughter herself didn't last more than a few months; she died and was buried in a vacant lot, while her doll was placed into the grave with her.

The doll bemoaned the loss of the girl she'd loved, and the dank, dark dreariness of the coffin she found them both in. When two grave-robbers dug up the girl's grave among many others, one of them found the doll, and tried to take the silver bell on her neck. Out of sheer will, the doll placed its hands over it, scaring the beejeesus out of the robber, who didn't notice the body-snatcher behind him witness the whole thing. This body-snatcher finished the two off for their fresh 'loot', and took the doll along back to the Toy Store.

The doll was given life using the soul of a cat demon, and takes on a human form similar to her beloved owner. Because the owner she had loved adored this color, the doll called herself Violette. 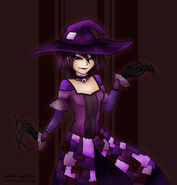 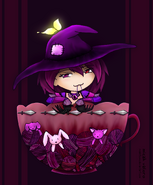